Read the latest about scams, scandals and scumbags....

James Merrill
BULLETIN: (8TH UPDATE 3:57 P.M. EDT U.S.A.) James Merrill, the former president of the TelexFree Ponzi- and pyramid scheme, has been sentenced to six years in federal prison.
U.S. District Judge Timothy S. Hillman ordered the sentence, which was four years less than what prosecutors in the office of Acting U.S. Attorney William D. Weinreb of the District of Massachusetts sought.
Robert Goldstein, Merrill’s lawyer, argued that his client deserved no more than a year.
(See below.) Also see the Boston Globe’s early story on Merrill’s sentence.
Merrill, 55, of Ashland, Mass., also was sentenced to three years’ supervised release after he completes his sentence and agreed to forfeit about $140 million and other assets, Weinreb’s office said. He was given until May 15 to report to prison. The former TelexFree officer pleaded guilty in October 2016 to eight counts of wire fraud and one count of conspiracy.
“Despite knowing that Telexfree was a pyramid scheme, Mr. Merrill profited for years at the expense of the hard-working individuals who invested in the fraudulent company,” Weinreb said in a statement. “For the hundreds of thousands of investors, here and around the world, who were taken in by the lies promoted by Mr. Merrill and Telexfree, today’s sentence provides a measure of justice. Mr. Merrill’s greed damaged the livelihoods of thousands of people who were simply struggling to make ends meet.”
Added Matthew Etre, special agent in charge of Homeland Security Investigations in Boston:
“While the harm and damage James Merrill caused by stealing more than $3 billion from innocent investors can never be repaired, his victims in more than 240 countries around the world can take some small measure of satisfaction that he is now looking at six years in federal prison and a substantial forfeiture as repayment for his crimes. HSI special agents will continue to aggressively investigate those who seek to profit by taking advantage of others.”
Read the full story here.
********************************************

MMM BITCOIN SCAM FAILS
From the desk of Ethan Vanderbilt.....

GO ASPIRE SCAM FAILS
From the desk of Ethan Vanderbilt.....

In my opinion, it's lying by deception, which must be mastered to be successful.


Here is what "Make Money Online Scams Exposed" has to say... 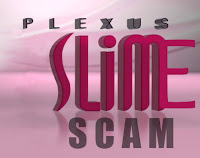 "This type of company is known to many as “direct, network or MLM marketing” and I like to think of it more as a “Pyramid With A Product.” These companies typically are building the cheapest, weakest products that they can get away with without the consumer noticing. The main goal of the companies is not the breakthrough product, that they make you believe… it’s the recruiting of people to get on your down line and pay a monthly auto-ship to make money from a huge pyramid/ponzi scheme."

Thank you Brandon for your efforts in exposing scams through "Make Money Online Scams Exposed".

Yet another MLM company hides between the lines....

Ethan Vanderbuilt I cannot thank you enough for your tireless efforts to expose scams like Vemma.

From the desk of Ethan Vanderbuilt....


Judgement day has arrived for Vemma. It is the end of Vemma as it once was.  Vemma was a Multi-level Marketing company.  It is no longer.

After the review of the case by the judge John J. Tuchi, here are some of the key orders and findings about Vemma:

The critical question for the FTC is whether the revenues that primarily support the commissions paid to all participants are generated from purchases of goods and services that are not simply incidental to the purchase of the right to participate in a moneymaking venture.

The evidence before the Court leaves little doubt that the FTC will ultimately succeed on the merits in demonstrating that Vemma is operating a pyramid scheme.  (read the rest of the story here)


The truth is, any MLM company I have been associated with, such as Plexus Worldwide, a person does not get to the top of the food chain or "Diamond" Ambassador by selling product.  You MUST grow your team by recruiting AND you don't get paid on those people you bring in unless they and you are "active" aka:  autoship turned on, minimum order of $100.  Take a look at their summary chart shown below (can also be accessed here). 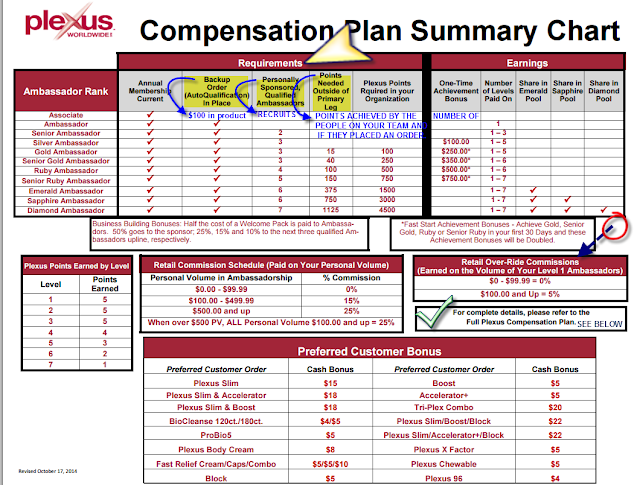 Also, it states "For complete details, please refer to the "Full Plexus Compensation Plan". HOWEVER, what they DON'T tell you is there is much more than just the compensation plan, there is the good ole "policies and proceedures" where they hide their dirt, but that's an episode for another day.

I was astounded by the severe lack of professionalism from Plexus Worldwide when I questioned rank removal of one of my team members, and received the most ignorant, unprofessional responses ever! And they call themselves a company????  They don't even know their own compensation plan!  "Uh, we dunt know whut happened".  Sounds to me like they don't know their nose from the hole in the ground!!

If you're interested you can read the rest of the nightmare here.

I say all that to say that most of the MLM's out there lack ethics and integrity, and clearly represent a classic pyramid scheme according to the Vemma Judgement.

FTC, are you watching???   There are many victims of such greedy, unethical MLM Companies waiting for you to bring the hammer down on new regulations regarding this scandalous industry.  I believe the crumbling of the MLM empire has begun....  it's about time.

According to Plexus Worldwide's website  today, June 18, 2015, (oh yeah, it could change by tomorrow) their "core beliefs" are to "Be Trustworthy, Be Honest, Be Reliable, and Be Responsible."  SERIOUSLY?

They continue to boast about their "synergistic product combination of Plexus Slim and Accelerator" and how their sales have continually grown.

What they DON'T bother to tell you, is that the products they reference here, Plexus Slim and Accelerator, no longer exist, as the ingredients BOTH products have changed dramatically.
#plexuspink, #plexus, #slim, #WeightlossDrink, #scams, #scandal, #scumbags

Does that sound "trustworthy" and "honest" to you?

And what about the testimonials?  Still using the ones from 2012, boasting results from a product forumla that no longer exists! 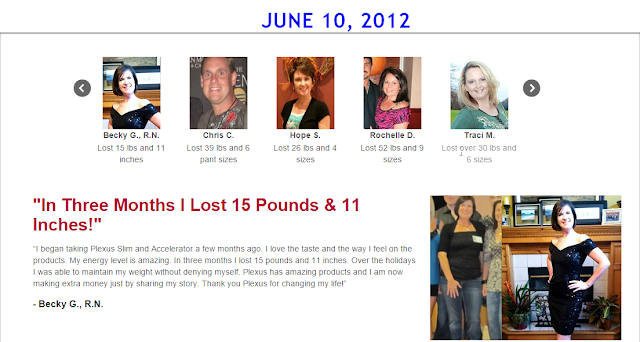 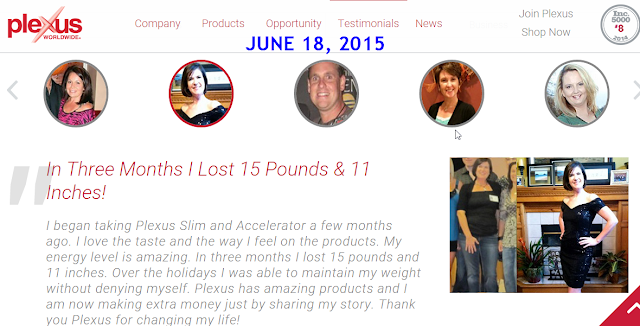 SO MANY LIVES TORN APART VIA MLM CULTS!


Read about the IMPACT OF MLM ON INDIVIDUALS AND FAMILIES

Then in a recent profile.....  she thinks pretty highly of herself.

I notice also that her "coaching career" is listed first... hmmmm.  Does she see the empire beginning to crumble as well?

Does that sound like someone who is "honest and sincere"?  Someone with integrity? 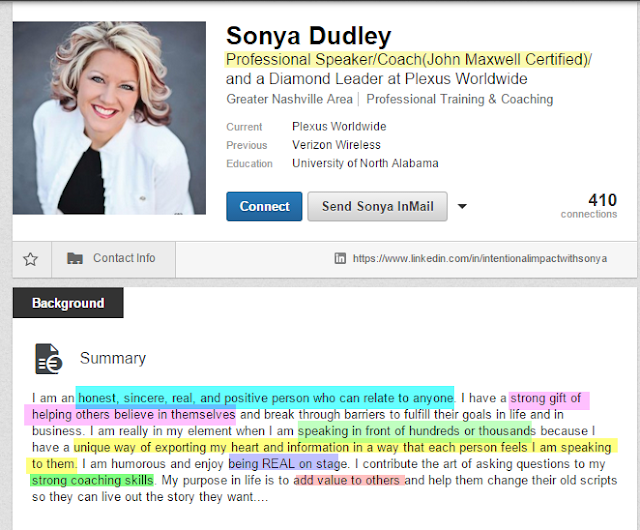 How creditble is someone that makes a commission off your sales, then charges you even MORE money to teach you how to do your job better so she can make MORE money?  Part of her job as a leader is to TRAIN you!  Good grief!


From the desk of the Ponzitracker......

JORDAN D. MAGLICH MONDAY, JUNE 15, 2015 AT 8:42PM
A Texas man is facing criminal charges on allegations that he ran a $4.5 million Ponzi scheme through the sale of purported interests in oil and gas wells.  William Allen Risinger was charged with three counts of wire fraud and one count of money laundering in an indictment that was filed in May 2015 but only recently unsealed following Risinger's arrest.  The wire fraud charges carry a maximum 20-year term per count while the money laundering  READ MORE HERE

Alvaro Puig
Consumer Education Specialist, FTC
Your social media feed is abuzz with stories of people making serious money selling an energy drink. Not one to miss out an opportunity, you do a quick search and come across a viral video. The guy making the pitch insists you can make thousands of dollars a month. “Forget working 9 to 5. Join the Young People Revolution!” he says. You think to yourself, “I’m young people! And I can totally get on board with a revolution.”
Slow your roll, my friend. Before you shell out a wad of cash and start making pitches to your friends, you should know that the FTC just filed a complaint against the company behind the pitch. The FTC alleges Vemma is running an illegal pyramid scheme and is targeting college students.  read more here

Eighteen elusive marketers who cheated American and Canadian consumers out of more than $7 million are banned from selling business or work-at-home opportunities under court orders obtained by the Federal Trade Commission.
These orders, along with court orders against 14 other people and companies named in the FTC’s lawsuit, resolve charges that the defendants conned consumers into thinking they could make money by referring merchants in their area to a non-existent money-lending service. Many victims affected by this scam were seniors with limited income and savings.
“The defendants tricked people into purchasing worthless ‘business opportunities,’ and manipulated the credit card system to hide their tracks,” said Jessica Rich, director of the FTC’s Bureau of Consumer Protection. “We’re pleased the court stopped this deception, which harmed many older people just trying to make a living.”
The defendants, who began operating as “Money Now Funding,” tried to avoid detection by law enforcement by changing product names, office locations, and merchant identities. They falsely claimed consumers would earn up to $3,000 per month by referring small businesses to the defendants to obtain loans. After consumers paid up to $499 to buy the business opportunity, the defendants told them that, to succeed, they had to buy sales leads that cost tens of thousands of dollars but turned out to be worthless.  read more here